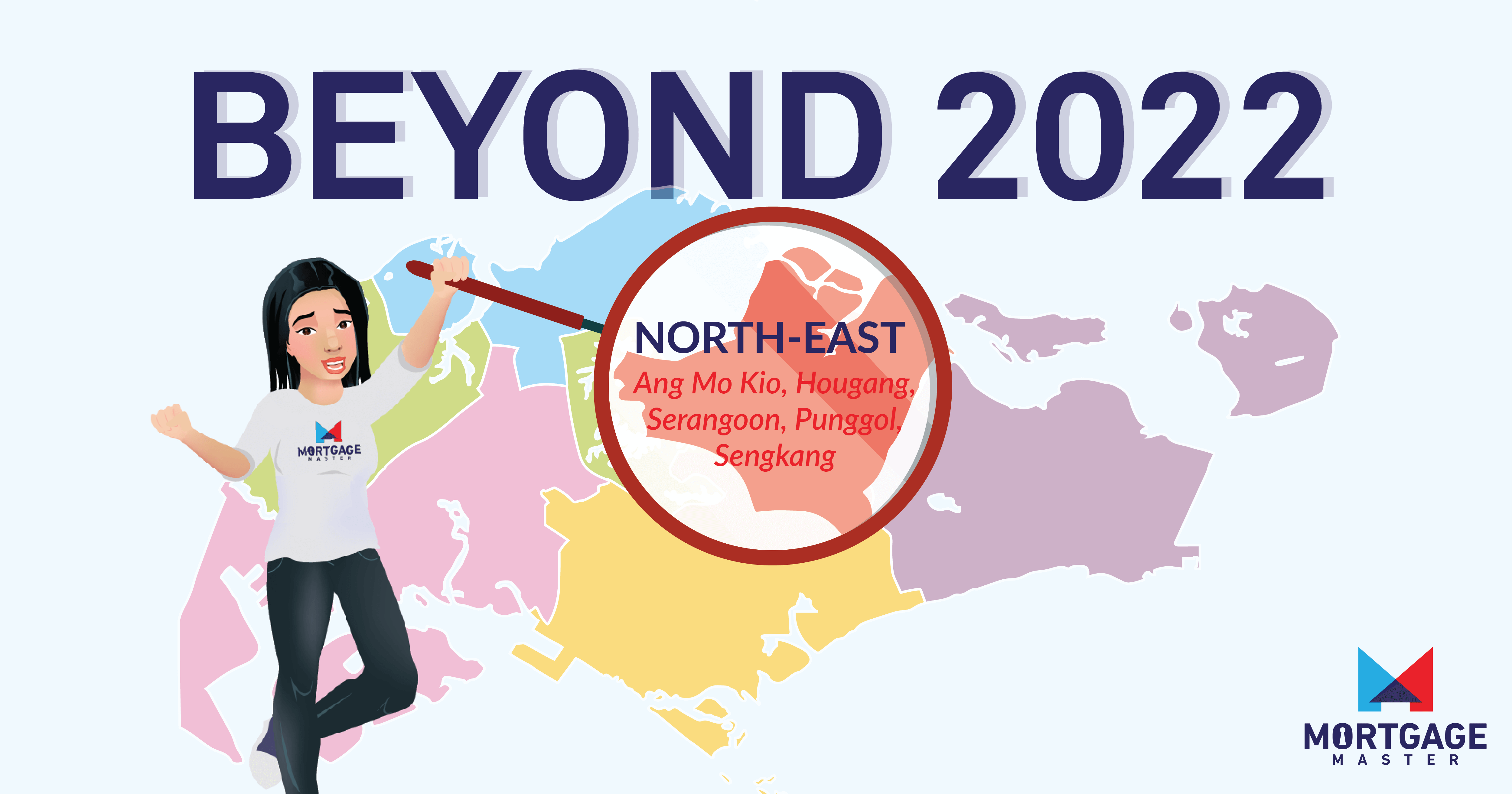 Since 2000, Singapore’s North-East has undergone enormous urban transformation. But we know that it won’t stop there. Here are all the highlights of all major developments in the North-East of Singapore if you’re planning for your next property move.

Check out part 1 of this series focusing on Singapore’s Northern region.

Every Singaporean knows about the MRT effect: The closer you are to the MRT, the higher the valuation of the property. If there’s a new MRT line that pops up right in your neighbourhood, property valuation will rise between a range of ~5% to 20+%.

For those who are living or planning to buy a property in the North-East, you should be taking into account that there will be an up-and-coming Cross Island Line (CRL) built across the whole North-East region of Singapore.

For Phase 1, CRL will extend from Bright Hill through Ang Mo Kio, Serangoon North, Hougang, and Punggol to the East, i.e. Pasir Ris and Aviation Park. The Eastward connectivity to Changi will bring residents closer to the business parks in the East as well as the Singapore University of Technology and Design (SUTD). 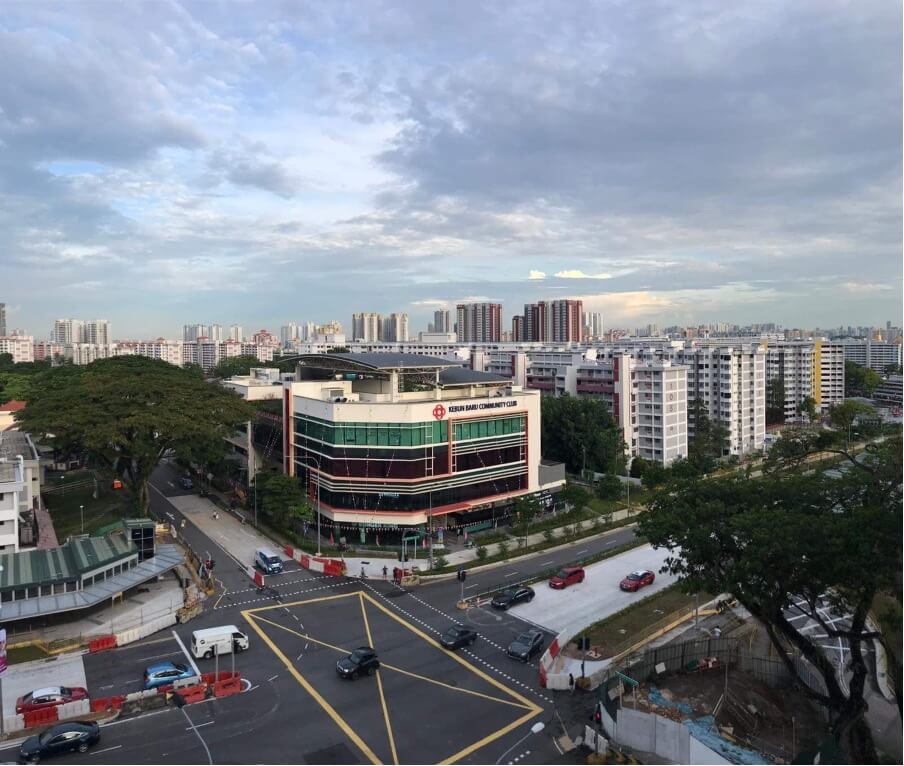 Don’t fret though. Those who are looking for homes with a fresh lease will be glad to know that redevelopment of Ang Mo Kio has already started. Two new housing estates are being built in Ang Mo Kio, i.e. Kebun Baru and Lentor Hills.

For the new Kebun Baru housing estate, HDBs are now about to hit its 5-year Minimum Occupation Period (MOP). One example is the Kebun Baru Court, which TOP-ed in 2018 and will be ready for its second batch of owners in 2023. 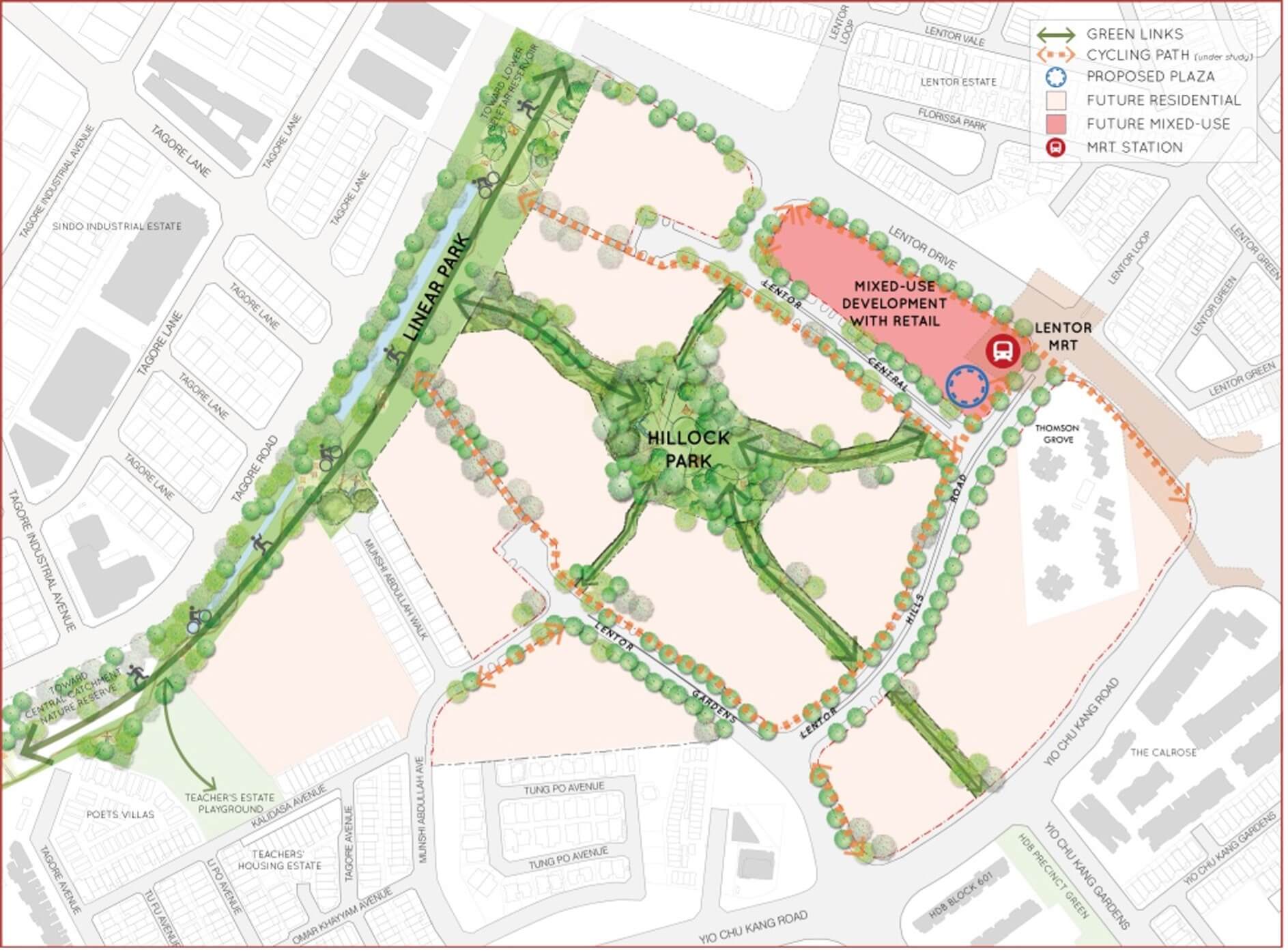 For Lentor Hills, it is still in the development phase with land sites being released for sale. For instance, three land parcels were put up for bidding in May 2022. These land parcels are located near Lentor MRT station on the Thomson-East Coast Line (TEL) and are in proximity to popular schools like Presbyterian High School, Anderson Primary School, and CHIJ St Nicholas Girls' School. 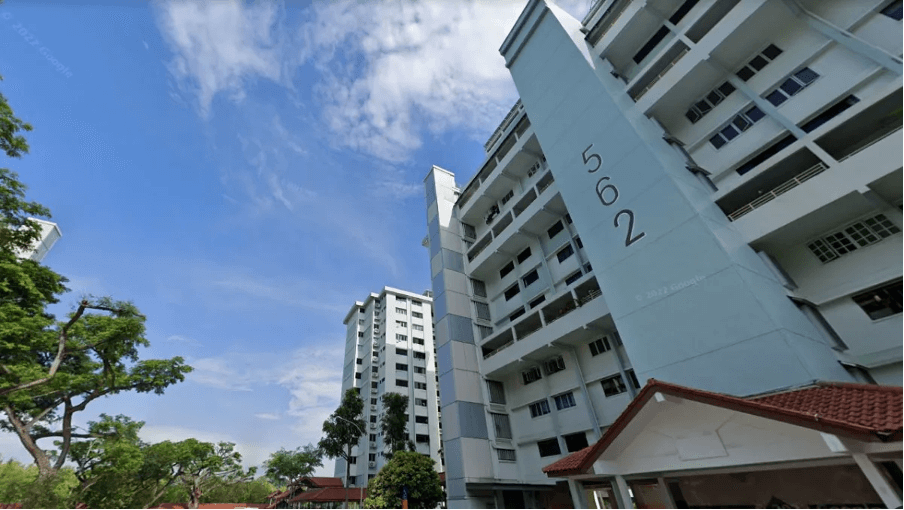 Read more about what we think about the SERS at Ang Mo Kio Avenue 3 here.

But beyond the major hoo-ha surrounding it, the SERS is a commitment from the government to keep Ang Mo Kio vibrant and make it equitable for young families to stay. The authorities are clearing the hurdles to have a bigger plot of land in Ang Mo Kio estate to give URA more flexibility for urban planning. It’s exciting to find out what new developments they will come up with in Ang Mo Kio. 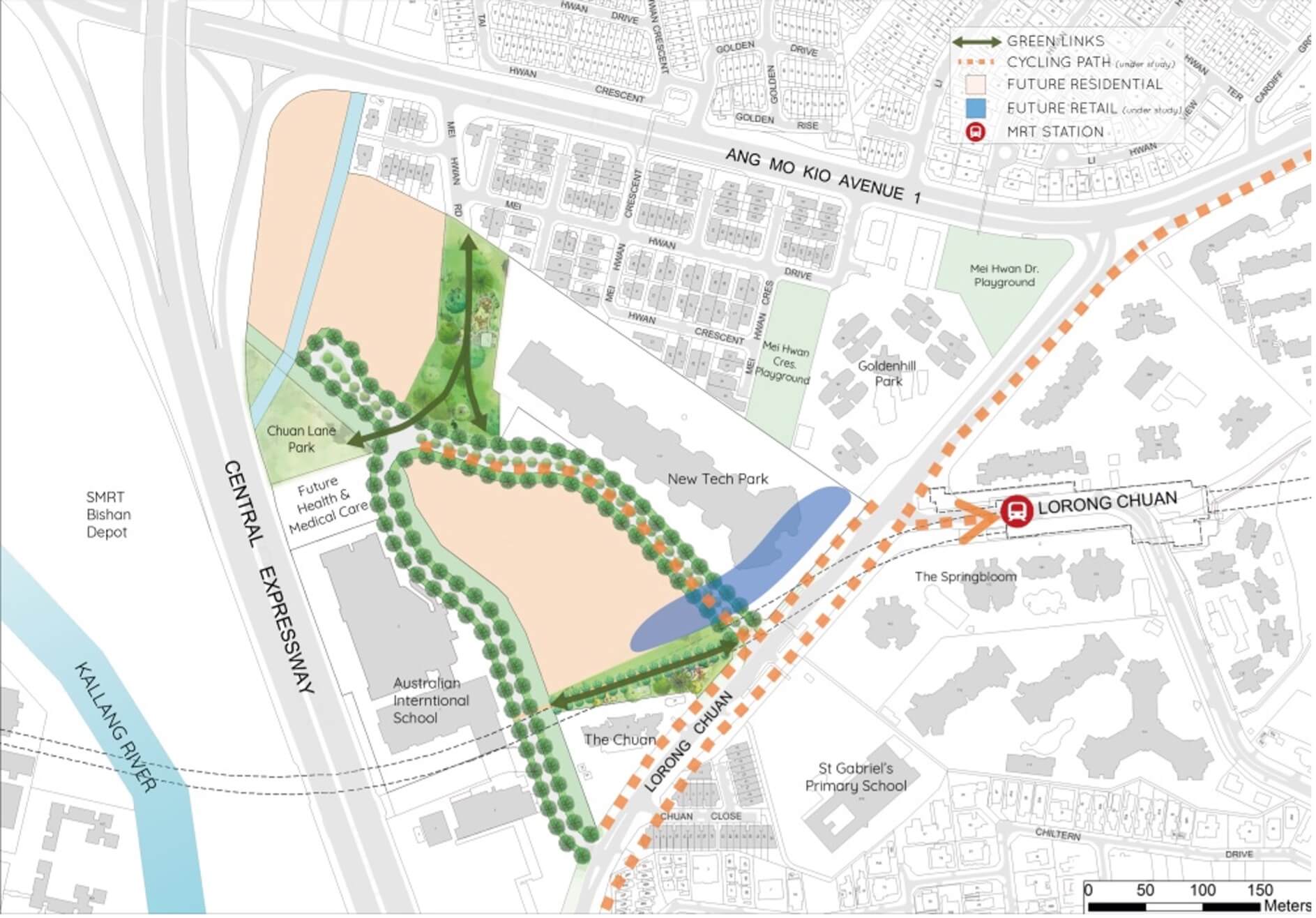 Besides the CRL, Lorong Chuan will have a new residential project. While Lorong Chuan is not a new estate per se and already has an MRT station on the Circle Line (CCL) that is currently serving residents, most of the homes in Lorong Chuan are landed properties. Thus, the development of Lorong Chuan as a housing estate will bring more public housing options to potential homebuyers.

Lorong Halus Industrial Park is the highlight development in Hougang, and is part of the country’s development plan to develop a regional centre in the North-East. It will come along fully-integrated with recreational facilities, public spaces, and greenery. The industrial park will be next to the Defu MRT Station on the CRL, and will be designed to be pedestrian-centric with access to waterfront parks. With over 100 hectares in size, it is comparable in size to the Woodlands Regional Centre. 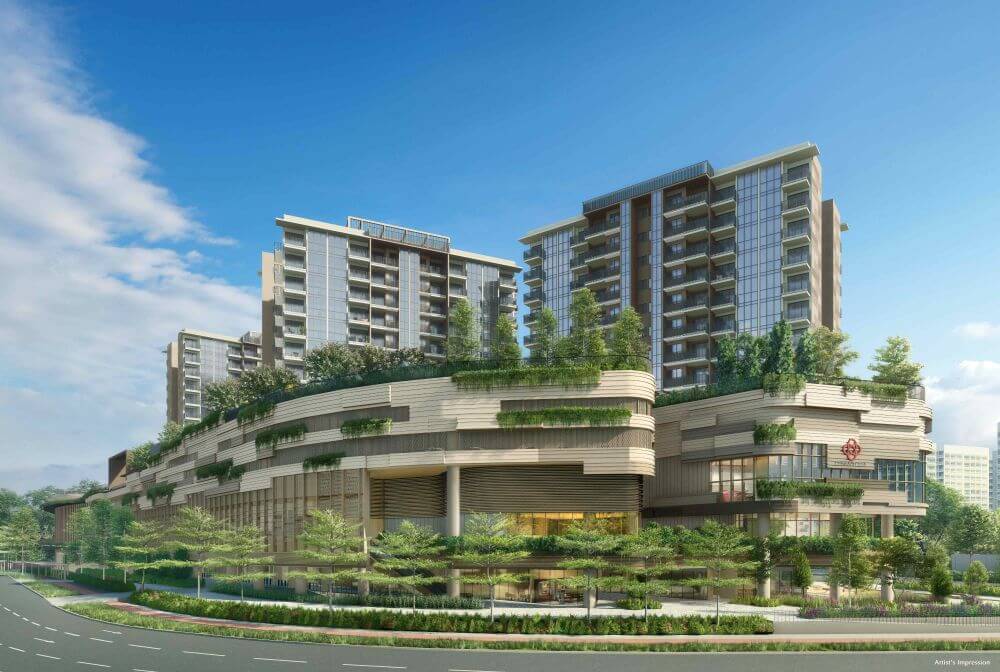 At Sengkang Grand Residences, you can find a bus interchange, the Buangkok MRT station, a community club, a hawker centre, and a shopping mall all under the same roof. More importantly, having a hub like this at Buangkok will create more convenient access to amenities for residents. 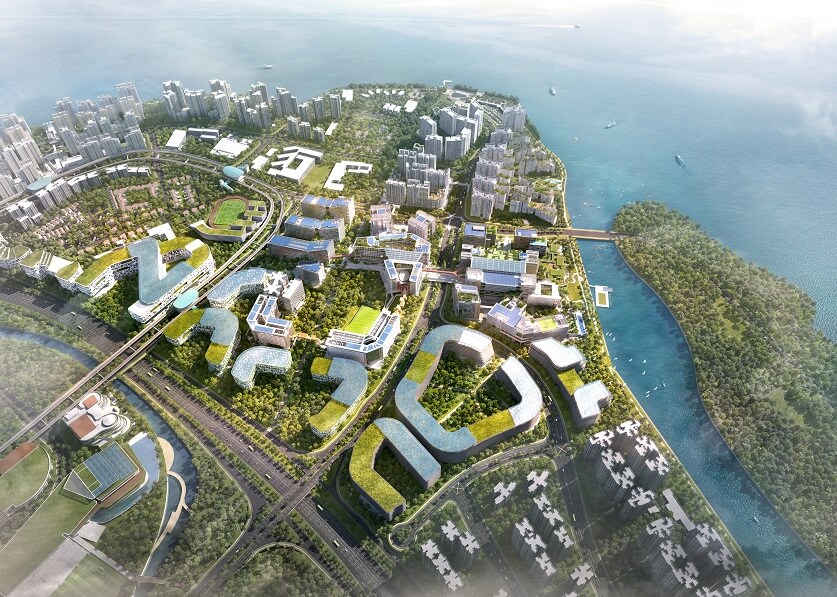 Punggol Digital District (PDD) is the rendition of an environment built for work and play. It will bring Singapore Institute of Technology (SIT) under one roof with the SMEs and MNCs from the industry as Singapore’s first enterprise district. PDD will house key growth industries of the digital economy like cybersecurity and digital technology. At the same time, it will create an inclusive and green lifestyle destination for the surrounding Punggol community. 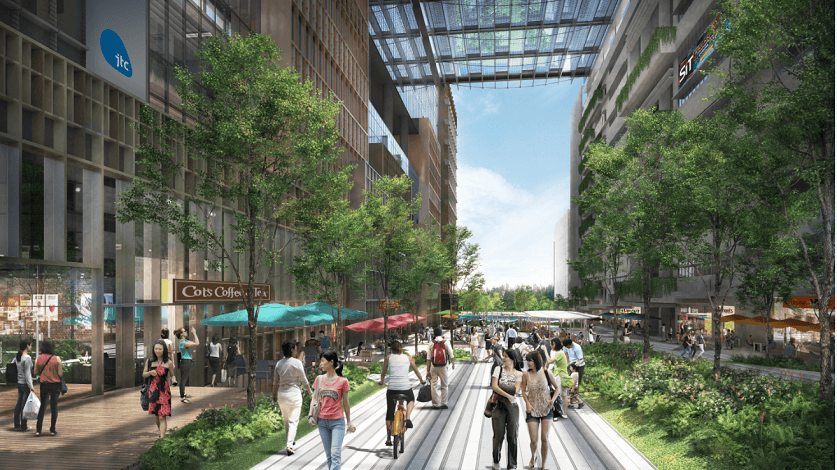 PDD will also be a pilot of the smart district to show the world how technology and integrated urban planning can create a more liveable and sustainable environment for the community. There will be an Open Digital Platform to integrate the management of the various buildings within a single estate system and centralise data collection of these systems. Anyone with an innovative idea can plug into the platform and access the data to create community-centric solutions.

Punggol Point District is an upcoming housing precinct in Punggol. It is envisioned as a green heritage estate with convenient access to retail, dining, and recreational activities. There will be a 1.5km heritage trail along Old Punggol Road, linking Punggol Waterway Park and PDD to Punggol Jetty.

With 5000 new homes coming to Punggol via the Punggol Point District, there’s plenty of room for potential residents to eat, play, and live in.

Being in close proximity to the futuristic Punggol Digital District and Punggol Point District is great. But it may not suit those who are working in the city centre given the distance from the city centre, even for those who drive.

But soon, residents will no longer have this issue. That’s because alternative routes like Punggol North Link and Punggol Central Westward Extension will be built to better connect residents to the Tampines Expressway (TPE) and Kallang-Paya Lebar Expressway (KPE). This will greatly reduce the travel time from Punggol to the city centre, making it a more attractive place to stay.

Financing A Property In North-East Singapore

If you are thinking about getting a property in the North-East, make sure to check out some of the latest home loan packages. Engaging a mortgage consultant like us helps greatly!

That’s because, at Mortgage Master, we know the latest home loan packages in the market and sometimes can even offer exclusive interest rate packages that you cannot get directly from the bank. If you're looking to purchase a new property, or refinance your existing home loan, fill up our enquiry form and our mortgage consultants will follow up with a call.